On Saturday, 23rd of July, 2016, David Miscavige came to Budapest, Hungary for the first time in the history of Scientology to yank yet another ribbon.

There is a popular mantra among Hungarian Scientologists – “Hungary will be the first Clear country!” So this grand opening ceremony was supposed to be a significant and historic event, a milestone in achieving that aim.

However, the whole spectacle turned out to be much more underwhelming than the loyal Church members probably hoped for.

Not to mention that it took 15 years of relentless fundraising, hard work, Central Files all-nighters and a total outlay of 10-12 million USD to realize this goal.

So, do they have any reason to be happy? Let’s see if they do.

The attendance was decent, but hardly inspiring. According to official Church sources, 3500 Scientologists and guests were present, but eyewitnesses and journalists say that this figure was 2500 at the most.

A Demonstration or an Opening Ceremony?

Local Church members failed to secure an occupancy permit for the public areas they intended to use for their event. They tricked the system though – they notified the police that they would hold a demonstration for religious freedom with guest speakers. This way they also got a free police contingent to secure the event.

So, on paper, it was a peaceful protest. In actual fact it was something else – metal fences were used to cordon off the area, registration booths were set up to screen attendees, the gates had metal detectors and an usually large amount of private security in black suits was watching over the event.

In addition to Miscavige, four so-called VIPs were invited to deliver a speech to the audience.

This roster is not exactly awe-inspiring, isn’t it?

When you are a Scientologist and your ecclesiastical leader says things like “It is said the whole world knows your city as a capital of freedom” and ”It is also said that whenever people yearn for liberty, they become ‘citizens of Hungary’”, you must wonder why is he so out of touch with the rest of the world (as both statements are absurd) or why does he employ second-rate hacks as speechwriters.

A local tabloid called Ripost published a story about the opening with rather colorful details. An English translation of it appeared on Tony Ortega’s blog.

Keep in mind that extraordinary security measures were taken. In addition to Church volunteers and numerous OSA staff members, they also hired a large contingent of private security guards. They visibly established a perimeter and there were even patrols around the city block where the event took place. Miscavige had at least 10-12 personal guards following him everywhere.

I managed to speak to a few eyewitnesses to confirm the story. Here is what I learned.

“On a neighboring table in the restaurant sat a well-to-do Roma (Gypsy) family who were having lunch. As is usual at times like this, the family were social and tried to make friends with the Scientologists.

“According to details collected by RiPost, hotel staff said that when the Roma family were told that the guest of honor was the head of the famous Church, they started to dance around him (Comment for context – this is very rare, but if this happens it is something very special. The Hungarian custom is to allow it, enjoy it and soak it in. Also a Roma family could be anything up to 50 people). After a few more glasses of wine, the Roma family began to nag him to bend a spoon, if he’s such a great magician.

“The situation was getting more and more unpleasant for the Hungarian Scientologists, who were finding it difficult to explain things to their leader, a man known to be very aggressive, especially when the Roma family asked the Church leader to make it rain, after all he gets on so well with ‘aliens’.

“The banquet hall then erupted with applause when it really did start to rain outside!”

The events described actually took place, but Miscavige was most definitely not present. Some of the local prominent members of the Church and their guests were the target of the overly enthusiastic family. Also, the family members were rather drunk when the whole sequence of events started (and we are not talking about just a few glasses of wine).

“According to details collected by RiPost, a furious resident, either from the street or from a small white Barkas truck (note for context: brand like Ford, very common in Eastern Europe), threw several buckets of human shit over the Church leader and those accompanying him.

“Several people became immediately unwell from the stench as the Scientology leadership began to run to seek shelter in the newly opened building. The faithful following on their heels were slipping and sliding in the excrement. Scientologists then set about trying to remove all trace of the human excrement while staff inside tried to clean the Church leader’s suit in one the bathrooms; we got this information from chatter from Hungarian Scientologists.”

It must have been a small consolation to the instigator that Scientology’s VIP guests had to pass by that stinking pile when they left the hotel to attend the ceremony.

According to Scientology beliefs, the inauguration of the Ideal Org should have sent “shockwaves of theta” throughout Hungary and result in an avalanche of positive newspaper articles around the country.

Well, most of the major newspapers and online news portals did write about the grand opening – but mostly either covering the sensationalist claims made by the Ripost article or questioning the involvement of Ildikó Szondi. The national security risks associated with Scientology were also mentioned in several articles. There was only one article in the entire country that put Scientology in somewhat positive light.

Well, that hardly qualifies as the beginning of a new era for Scientology.

Is It Really Done?

There is one slight problem – they still do not have an occupancy permit for the building and it will take a few more weeks to have all the paperwork finalized. So theoretically, they cannot do anything in it (except for construction work) until that is secured.

So, the opening was just a show then, part of the Miscavige’s strategy to reassure the financial backers of Scientology that all is well and expansion is happening.

Well, Scientologists in Hungary already waited 15 years, so a couple more weeks probably will not matter.

But I sincerely hope they started to have some doubts and second thoughts. As you can see, they have every reason to do so.

You are always welcome – NOT!

The following plaques were installed near the front door (photo taken by 444.hu): 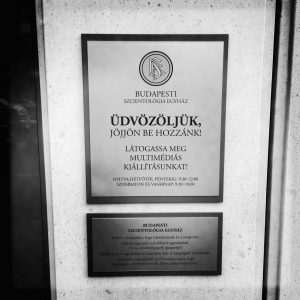 Translation of the larger one:

And under it:
Church of Scientology Budapest
Visitors are required to register at Reception.
Media visits must be arranged in a preliminary manner.
Please call the Director of Public Relations.
Please do not use any audio- or video recording devices in the Church.
This is a private property and the Church reserves its right to deny entry from anyone and remove anyone from the premises.