This a short recap of the current state of the Budapest Ideal Org Project.

The End of Endless Fundraising

Seemingly, Hungarian Scientologists have finally completed a 15-year old “cycle of action” (as they say it in Scientologese) and the grand opening of their freshly renovated palace is imminent.

The official date and time of the opening ceremony is 23 July, 13:00 CET (also confirmed by the official Church website called orgevents.org).

Remarkably, this is the 4th or 5th date they announced, but according to our sources, this is now for real and there will be no more delays.

The building itself is a 6000 m2 modern office building, and according to the promotional materials published by the Church, it will have 32 auditing rooms, a 300-seat chapel and 12 course rooms.

Why they need such a huge facility is a bit of a mystery. The number of somewhat active Scientologists in Hungary is around 1000-1200, with a dedicated core of 300-400 members. They will definitely struggle to fill this “Ideal Org” with enough customers, and even paying for the utilities will be a considerable challenge.

The new building will house two “Class V” Orgs (which can deliver every service up to the so-called State of Clear), Budapest Day and Budapest Foundation, and there is a huge push to recruit a combined total of 330 staff members to fill every important position in both orgs. The last available report (which is a month old) mentions that they passed the 280 mark.

Should they succeed, Budapest Org would definitely be the biggest non-Sea Org organization on the entire planet.

A few days ago, the foundation received a report about the current conditions in the org.

The Big Boss Is Coming to Town

And yes, it still looks like to David Miscavige could not resist this opportunity to yank yet another ribbon. He is confirmed to come and the frantic scramble to recruit a few VIP speakers for the ceremony has began…

They Want It All

For some reason, the logo of the Budapest Ideal Org contains the Hungarian Parliament Building. 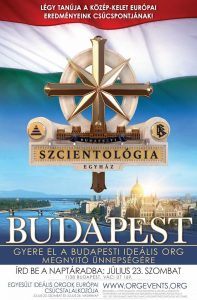 No idea why they did that, but I sincerely hope they will never get anywhere near to achieving that implied goal.